If you go to enough seminars you learn to value the time outside of the classroom as much, if not more, than the time spent in the actual presentations. One coach (and Seminar presenter) I find myself able to learn more from every time we talk is University of Iowa strength and conditioning coach/Dietician, Landon Evans. During the 2014 seminar, I found myself at the breakfast table next to Coach Evans, Dan Hammes (University of Iowa) and Jason DeMayo (University of Richmond). One topic that I remember clearly was how presentations should be simplified: tell “us” what you wanted to train, what you tested, what you actually did, and the results your athletes achieved. After you have done this, provide some reflection for what you believed worked, what may not have worked, and what you would do differently.

This article will be written along those lines. I’m not going to talk in abstracts. I’m going to give you every detail I’ve got and lay everything on the line. At the end, I’ll talk about what I think worked, what could be improved, and what I would do differently.

Frequency: 2x/week(1 hour each session) at 6 am

Goals: Strength and Technique were primarily my goal with this off season. The team hadn’t formally strength trained in several months so in preparation for their off season(summer) workouts I thought it’d be best to not only re-introduce them to the basic lifts they’d be performing on their own, but also improve their strength. Besides strength/technical proficiency, I also included acceleration/speed/power exercises. The speed/acceleration was originally intended to teach mechanics at sub-maximal speeds. The power exercises (medicine ball throws and jumps) were included to act as a bridge between the warm up and resistance training workouts.

Acceleration: 1. 10 yard dash: This was tested from a standing start using the Brower timing system. 2 attempts were given with a full rest in between each. 2. 18 yard dash: After talking with our coaches we decided to include the 18yard dash as it represents a more specific sprint in field hockey. Again, all speed tests were performed using the Brower timing system, with 2 attempts and a full rest.

Speed: 1. 40 yard dash: Similar to the other tests, 2 attempts were given using an electronic timing system. Also of note is that we tested in the morning (6am) on the indoor track.

Power: 1. Broad Jump: 2 non-consecutive attempts were given to achieve the furthest distance. The jumps were performed prior to the speed/acceleration tests.

Strength: 1. 1 Minute of Push Ups: This is a test they normally perform with their sport coaches. The athletes attempt to do as many push-ups in 1 minute as possible (using a tennis ball on the ground as the marker of a full repetition). 2. Chin Ups: Using a neutral grip, only full range of motion pull ups were counted. 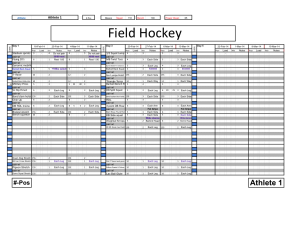 Notes on reading the sheet: The sheet reads straight down in groupings of 3 exercises. There are times when the exercises are not meant to be paired together, such as the stadium sprints and flying 20’s. Anything pertinent to the exercise is listed in the “Notes” column (often this is more for my own tracking than the athletes, i.e. the rest interval between sprints on Day 1).

Day 1: Stadium sprints were originally intended to be in the program but I had not taken into account that the athletes were going to individual practices after our training session. In an effort to not ruin their legs for those sessions I decided not to perform the flying 20’s and stadium sprints. Barbell squats were programmed as such to gauge roughly what the girls were capable of (hence the add 10lbs. each set in the notes). Exercises in between were included to keep the athletes moving instead of standing around using low intensity exercises (T raise and seated band abduction). Overhead (Military) Press was the main upper body pressing exercise. For those unable to perform the reps with the bar, dumbbells were used. Again, Single leg hip thrusts and band clam holds were included to provide some low intensity stimulus to possible areas that needed extra work. Chin ups were modified, if necessary, using a band. The DB RDL’s were included as an added exercises to compliment the squats performed earlier, while the Bench squeeze provided minor grip training. The bretzel stretch was performed to stretch the hip capsule and upper back. The post workout stretches were usually performed if time permitted. Athletes sometimes had to hurry to get to their individual practice or class.

Day 3: The jumps and medicine ball throws were included on this day to bridge the gap between the warm up and the workout. The importance of the knees and hips in all of the jumping and throwing exercises was reinforced. The back squats in this workout were performed with a 5 second eccentric. Early in the off season I’ve found that the eccentric exercises are great teaching tools to help athletes feel proper positioning without me having to always cue them. I also included a low level isometric exercise here as it allows the athlete to feel the correct positioning of the knee, shin, and hips. It also helps prepare their legs for the Dumbbell split squats in the next block. Triangle terror is merely a lateral X band walk. The bench press was included with the same intention as the squat on Day 1(i.e. progressively increase the weight, but don’t go to failure).

Dumbbell split squats were the single leg exercise I decided to include purely because I believe the extra stability from having the back foot down allows for better hip/ankle/knee control. The hydrant kick holds were an isometric exercise used to strengthen the glutes. Barbell RDL’s again were used to compliment the squat, as well as provide eccentric strength for the hamstrings. For extra grip work, we attached Fat Grip devices around the dumbbells for their rows. Though normally a trunk exercise, the bent knee trunk rotation acted as more of as stretch for the hips/low back. Finally, the Kettlebell goblet side squat provide a stimulus in lateral plane, while the weighted sit ups were used to strengthen the trunk. The groin hold was, again, a low intensity isometric used to train the adductors. Soft tissue work was placed at the end of the workout for those not constrained by time/classes, etc…

Part 2 of this series will focus on the results we got from our first phase of training, as well as the 2nd phase and all of the testing we performed.