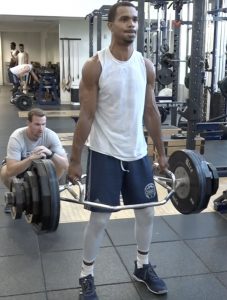 In this 2 part series Rice Owls Basketball Strength Coach Sean Brown shares with us his program that he utilized through the 2017-18 season with his team. Part One is an overview of the program, while Part Two is the program in it entirety, the results achieved, and Coach Brown’s evaluation (both pro and con) of it.

I think at this point it’s safe to say we have discussed the challenges of in-season programming for college basketball pretty well. We certainly haven’t found the solution (if there is one), but I feel confident we can all start from a common place in terms of understanding college basketball in-season programming. What I aim to do here is provide an overview of the micro-dosing platform I followed this past season and a discussion of what I found along the way.

To begin with, I was looking to improve upon (albeit with a different team) the in-season protocol I used last year based on Dan John’s “Easy Strength” program. You can find a summary of that program here. It’s not mine, it belongs to Daniel Roose at The University of Texas. I simply contributed to it in my previous role and saw its benefits and drawbacks firsthand.

Like last year’s program, I wanted to begin the program in preseason (with some variation) to establish the specific culture of lifting in-season as well as accommodate the increased volume of on-court activity. I also wanted to continue utilizing a versatile program that allowed me to progress lower training-age athletes throughout the season, as well as individually tailor to fit for more experienced athletes. That’s the important thing to remember. This is not a program so much as it is a platform and a mindset. The perfect fit in this case came after hearing Cory Schlesinger talk about his program at Stanford in Episode 99 of the CVASPS Podcast. I highly recommend listening to it, but if you don’t, just know these things from it that I used as the basis for the in-season program:

Condensing everything Coach Schlesinger said into those three points is utterly ridiculous and borderline insulting (maybe not really even borderline). However, for the sake of time that’s what I will focus on.

With these things in mind and after talking to a few much smarter friends about what they’re doing, I came up with what follows. Bob Alejo, whom I don’t know personally but follow nonetheless, has been fond of saying recently regarding his programming, “this is what I did, this is what happened”. I think that’s a very appropriate way to approach this. I am not claiming this to be the perfect solution, and I am certainly not claiming that I even came close to doing it as well as others have. I simply am laying out what I did and how it worked for me.

The major difference between what I did this year vs last is the frequency. Last year’s program was 2x per week, this year was 3-5x depending on the week. This year, in 42 days of preseason (30 of which we can use for practice), we lifted 23 times. During our 15 weeks of season, depending on player, we lifted between 40-50 times.

The structure of the lift also changed. Instead of performing the same lift 2x per week, we performed a different major lift every day, with different preparation for said lift. This way we are hitting our major lifts once each week, lifting almost every day, and minimizing volume and overall fatigue imposed on the player, keeping variation and intensity high. In short, every day we are looking to get the best “bang for our buck”.

I explained this lift to my players with the basic and uncomfortable (for both of us) premise that I am going to put them in the driver’s seat. Every day when they come in we are going to see how good we can be. Sometimes that will mean that our body is telling us we are beat up. That’s okay. Sometimes we are the same we were last week. No problem. But, it also might tell us that today we are feeling great and we might be able to get stronger. When that happens, we are going to ride the wave and see what we can get. No matter what, I’m not telling you what weight to lift. I can help guide, but I’m not prescribing it. I need you to know what 90% is supposed to feel like. I need you to know when something was too light.

There are so many angles to how this works it is impossible to cover them. Essentially, I viewed it as my job within this framework to educate my players on how to listen to their body, and then from there how to push it to get better while staying as safe as possible and not completely overloading themselves.

Fill in the Gap

I’d like to proclaim my extreme progressive thinking and ingenuity regarding our warm-up, but the reality is I stole it shamelessly. If you haven’t already, you can read the summary of it here. Throughout the entire season we followed what my players know as the “RCCRCTS” warmup (creative I know). The beauty of this warm-up protocol is I have a seemingly endless list of progressions and regressions for each primal movement that I can pick and choose from based on where our bodies are at that point in time. This might mean that we stick with the basics one week because coach is really hammering us on the court. It might mean that on game day I am just trying to fire up the CNS while minimizing joint stress. It also might mean that I have multiple groups and individuals following different warmup protocols because of what I see or hear from them and how their body is feeling.

The bottom line is every day I have the chance to customize a warm-up allowing me to address our needs. We will always find a way to run, crouch, crawl, roll, carry, and swing every day. I found that as the season went on, I could also sneak some more pulling into the warmup (especially in the absence of monkey bars), particularly for my younger players that needed a little more volume. Sometimes pull-ups or chin-ups, sometimes tire or sled pulls, again all based on how our bodies were at the time.

We would run the warmup 2-3x through, allowing for even more variation, and overall taking 5-10 minutes to not only get ready for the lift, but to address movement quality.

Following our warmup, we would flow immediately into our prep sets/circuits. This always consisted of some form of BB/DB/KB complex. Generally speaking I would be looking at this complex to both prepare us for our “big bang” lift as well as hit our fundamental movements (straight from Dan John). So, some of these might be:

You can use your imagination here. I don’t claim to be a master of the most creative complexes. In time we got to some more interesting versions utilizing different tools like trap bars, landmines, etc. However, with the relatively young training age of my team the most basic of these complex variations were more than sufficient to progress us through the season maintaining the appropriate stimulus.

Along with our complex we would aim to hit a corrective or preparation movement corresponding to the day’s big bang lift. Usually these fell into the categories of hip, ankle, or t-spine mobility, but ultimately were driven by my particular players and their needs. In our case, we found ourselves doing things like tactical frog progressions, dowel t-spine extensions, wall slides, side-lying windmills, band pull-throughs, kettlebell suitcase deadlifts, kettlebell/band TKEs, etc.

For some players, particularly my older or heavy minute guys, the “prep” portion of the lift ended here. Not always, but usually they were ready to hit their big lift and move on to practice. For other players with low training ages or minutes, I usually added a third movement here to fill in some of the gaps of what they need. It might have been core or anti-rotation work, dumbbell pressing, another pull, or RDLs (we do A LOT of RDLs). Whatever we felt like needed working on is what we would do. Particularly earlier in the season, I could also use this time to work on Olympic variations with those that were ready.

NOTE: The warmup changed every day, and the big bang lifts weren’t going to change. In the prep portion I stuck with a complex for 3 or 4 weeks before it got stale and we moved on to a new one for variety and added complexity.

At this point we will have been working between 10-20 minutes. We are plenty warm, have hit primal/fundamental movements, addressed movement quality, and are ready to get stronger at one thing for the day.

Just as with the entire program, volume and intensity varied on these lifts based on the time of year and how each player was feeling. However, these lifts still followed a fairly predictable progression. Our first week of preseason, coming off of high volume work in preparation for practice, we began picking our intensity up and dropping the volume. Throughout the entire program we never lifted more than 5 reps in a set for the big lift, and the highest total (prescribed) rep count would never get above 15. Below is the volume and intensity we ended up with for each week of our season. This pertains to each of the major lifts for that week.

Who is Sean Brown?

Sean Brown is in his first year as Strength & Conditioning Coach for the Rice Men’s Basketball team. He comes to Rice from The University of Texas at Austin, where he spent the last two years working directly with Men’s Basketball.

In his current role, Brown is responsible for all year-round strength & conditioning aspects of the Men’s Basketball and Men’s Golf programs at Rice.

He also has held volunteer/internship positions with Southwestern University where he worked with football, volleyball, basketball, swim & dive and soccer, as well as University of Texas Athletic Performance.

A native of Fairfax, VA, Brown lives in Houston with his wife, Kate.