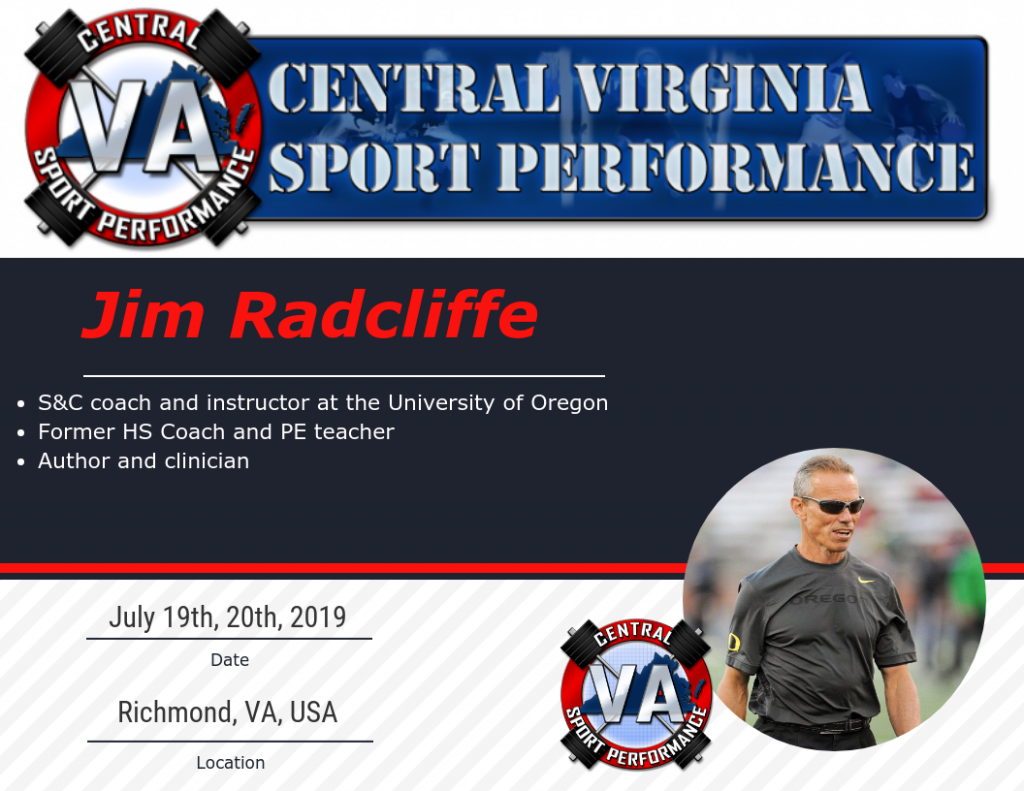 Today I am elated to welcome Coach Jim Radcliffe from The University of Oregon to this summer’s edition of The Seminar. Coach Radcliffe has worked with some of the world’s best athletes, producing NCAA, National, International, and Olympic Champions. Most people in the field probably know his name mostly for being the “speed guy”, but when you do your research you realize that Coach “Rad” has been way more than that to the field. Presenting all over the US and the world, being a multi timed published author in both periodicals and books, Jim has been leading from the front driving education in this vocation and giving back to coaches for the past three decades. A track record (pun intended) that speaks for itself, and the desire to continue to pull the profession forward from the front make Coach Radcliffe an absolute perfect fit for this summer’s event. But enough from me, let’s meet Coach Jim Radcliffe…

JD: If you could, please give our readers a little background information about you, what your niche in the world of athletics is, accomplishments, how you got there, education, any products you have available and/or notable publications.

JR: I have been at The University of Oregon starting in 1985, and in my tenure, I’ve been about to be involved in quite a few sensational moments as a coach. Coaching has brought me the privilege of being an author, the trust from international teams to have me on as a consultant, along with being able to present to coaches, not just all over the country, but around the world as well. I’ve also had the pleasure of working with some sensational athletes who have had tremendous success from multiple national championship teams and individual NCAA champs, to international champions, and Olympic gold medalists.

JD: Discuss with us the mistakes you see made by strength and conditioning coaches in the United States and around the world, andwhat you feel should be done differently/how to correct these issues.

JR: The main issue is just a lack of being educated physically. Being an “old” dinosaur of a coach and from an era where being a coach (of anything) meant you were also educated as a PE teacher. Some of the issues we are seeing as a S&C profession really boils down to not enough of this type of education.

JR: Some quickly accessed and helpful in terms of practical research are the GAIN network, a website called ResearchGate, and The Strength Coach Network.

JD:If you could give a brief description of what our attendees can expect from you at The Seminar?

JR: A practical approach to using the science of athletic movement to simplfy the developmental training concepts.

Who is Jim Radcliffe?

One of the most overlooked elements in the success of Oregon’s student-athletes is Jim Radcliffe, now in his 30th year as the school’s head strength and conditioning coach and 32nd overall. He not only plays a significant role in the Ducks’ football program as the designer of the year-round conditioning calendar but also has been quick to aid the athletic development of athletes in the sports of baseball as well as men’s and women’s track & field.

While he has long been one of the integral components to the program’s success – as often credited by both past and present Oregon student-athletes – his work and innovation are now recognized as one of the overwhelming contributions to the fast pace the football team has employed the past seven years.

During his tenure as the longest among his counterparts within the Pac-12 Conference, he as established himself as a highly-respected teacher, mentor and author. An active clinician throughout the world, he is widely recognized as one of the leading authorities regarding exercise for the development of strength, speed and agility.

In addition to overseeing a strength and conditioning program that was named one of the top 10 in the country in 2013 by Bleacher Report, Radcliffe was included on a list of the 65 most influencial strength coaches of all time by another 2012 website, as well as one of three national finalists for FootballScoop’s Strength and Conditioning Coach of the Year award in 2010.

Radcliffe, who guided the receivers during much of the 1999 fall camp, furnishes the student-athletes with a wide variety of exercise through weight training and lifting systems, and is a noted authority in the field of exercises dealing with the improvement of speed and quickness.

The 58-year-old McCloud, Calif., native became assistant strength coach at Oregon in 1985, a position he held for two years before assuming the direction over his specialty.

Radcliffe taught and coached a variety of sports and was the athletic trainer for four years at Aloha (OR) High School from 1980-83.

He then did graduate study at Colorado and worked in private business prior to joining the Ducks’ staff. Graduating from Pacific (OR) with a degree in physical education and health in 1980, he played four seasons at defensive back and was captain of the special teams. Radcliffe earned his Master’s in biomechanics from Oregon in 1992.

Radcliffe is active in national organizations surrounding his profession and is certified by the United States Weightlifting Federation. He also has written books, been published in numerous professional journals and produced videos on plyometrics, one of the most effective exercise techniques.

Radcliffe’s wife, Janice, is an instructor and fitness director in the University’s department of physical education and recreation. (From https://goducks.com/coaches.aspx?rc=2949&path=cross)

Book your seat for The 2019 Seminar by clicking the link here: https://cvasps.com/the-seminar/2019-seminar/

ENJOY THE CONTENT? THEN YOU SHOULD CHECK OUT THE STRENGTH COACH NETWORK!