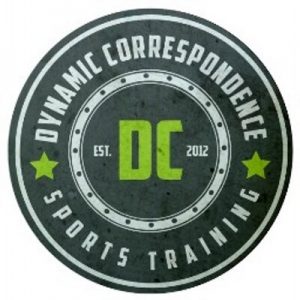 Agility in sports is typically a response to what is seen. Agility is a rapid, whole-body change of direction or speed in response to a stimulus. That stimulus can be an opponent, a teammate, a ball, or a position on the field. Agility is a distinct quality underpinned by physical qualities such as deceleration (eccentric strength), starting strength, explosive strength, proper change of direction technique, as well as sensory qualities such as anticipation, pattern recognition, visual processing time and decision-making. Visual information is the dominant sensory system when performing practically any perceptual motor task. Athletes at a higher level of sport tend to be superior in agility tasks that require dynamic visual acuity & visual processing reacting to a stimulus. Research has demonstrated that higher-performing athletes can be distinguished by their sensory abilities (anticipation, decision-making time, decision-making accuracy) when they have been tested with sport-specific cues. These sub-qualities are trainable on their own (3-D Depth Perception, focus, eye teaming, eye-hand coordination, light sensitivity, visual memory, visual processing) and/or agility as a whole is a trainable quality.

There is a notion of 20/20 vision is perfect, however it is a poor basis of the quality of an athletes vision as simply means that a person can identify the majority of black letters on a white background at 20 feet of the specific size of 8.75mm. in height that is set up at eye level. The use of black letters on a white background is called a high contrast test, however a person’s visual acuity drops when they are presented with low contrast tests (different lighting, color letters, shadows, ect.) We know that this is not at all how sports work visually. Try reading your favorite book (Harry Potter) while doing squat jumps with half of the book on the floor and the other on the table…a bit harder to read. An eye doctor is primarily responsible and concerned about ruling out significant visual problems related to high contrast testing and a wide variety of eye diseases.

Like most physical qualities of the body, visual skills are multifaceted: Static & dynamic visual acuity, Peripheral vision, contrast sensitivity, depth perception, binocularity, fusion – convergence (eye teaming), ocular mobility, processing speed, spatial awareness/planning, visual integration, visual perception and working memory are all important pieces to the puzzle for an athlete. I am a firm believer that sensory system develop is a CRITICAL piece to an athletes sport performance and one that must also be worked on and developed. Strength & conditioning coaches often sole focus on the neuromuscular system for athletic development, but neglect the fact that there are 14 muscles of the eyes (7 muscles per eye), that can also be trained to improve sport performance.

Case Study:
I have been working with this one male tennis athlete for close to three years now (from sophomore in high school to now a sophomore in college). He now is playing D-I tennis, and since I have known him his backhand has been the bane of his tennis playing. His backhand has been an on-going work in progress. Many hours of practice, many slow-motion video analysis sessions, many days and weeks of technical development on his backhand, we’ve tried just about everything.

I must admit that I am lucky enough to have friends that are freaking smart. People that are experts in their field. Dr. Bill Harrison (Doctor of Optometry) and his son Ryan Harrison, with a degree in Exercise Physiology, with their company Slow The Game Down, just so happen to be people I am fortunate enough to correspond with. One afternoon Ryan Harrison was in town and came to visit me at my gym. In his brief visit, Ryan quickly met my college tennis athlete and was able to perform a quick visual assessment on him with the use of an Eye Trac. In a matter of a few minutes Ryan evaluated the binocularity of my tennis player and was able to determine that he was only able to get about 20% power out of his right eye as opposed to his left, and that his depth perception was not very good, particularly with his right eye. Without knowing a thing about this athlete other than he played tennis, based on his quick assessment, Ryan asked him if he had trouble on the court dealing with off speed shots to his backhand because mechanically he was always a bit in front of the shot and would pull them. In amazement, the athlete confirmed that this was completely true and something that he has been struggling with for years. All based off of a little tool called the STGD Eye Trac. This “mechanical issue” that he has been having with his backhand for years wasn’t due to his technique per-say, but his ability to perceive the ball that was causing the technical issue of being early and pulling his shot.

Slow the Game Down:
Viewing an object with one eye is called monocular vision, while viewing an object with two eyes is called binocular vision. Convergence is how well the eyes are used together to turn inward to sustain convergence on an object, which are important in sports to aid in timing and eye-body coordination. This is especially important for small, fast moving object sports (tennis, softball, baseball, hockey, lacrosse). Each of your eyes have a different visual line of sight due them being spaced out (on either side of your nose). Your eyes are like two camera’s filming the world and it’s how well these cameras can converge on and at different angles to an object that they create a single stereoscopic perception.

The STGD Eye Trac is not a MRI or a CT Scan, but is a means for observing and assessing eye teaming, which includes measuring binocularity and convergence. The STGD Eye Trac assesses two issues: one, are both eyes and the brain working together to process information. The tendency of the brain is to save energy (for survival), so it is going to suppress any information that may not be coming to it clearly. (Central System & peripheral system). In order to preserve energy for survival, the brain will suppress information that it thinks it doesn’t need. The second issue is about projection. This has to do with how the eyes and brain project objects with accuracy. For example, a baseball player may project the ball to be closer and higher than it actually is, so he may swing early and on top of the ball. A golfer may constantly short put the ball because they project the hole to be 10-20% closer than it actually is.

According to Dr. Bill Harrison, most athletes use both eyes for peripheral vision (the Magno system is intact on both sides of the brain), however with central vision, most athletes uses one eye (the Parvo System is not intact on both sides of the brain). If an athlete’s actions involve timing their physical actions to the speed of the ball, then binocular Parvo (central vision) gives them the necessary information. Two players may look at the same pitch, one may see it closer, one may see if further. One may see it higher, one might see it lower. These are particularly important in sports that involve fast moving objects (baseball, softball, hockey, tennis, lacrosse). An athlete might very well only see part of what they are looking at. (straight line rather than a Y or X with the string). This is all an indicator that the brain is not receiving proper information from the eyes.

Ryan and Dr. Harrison have accumulated thousands of hours of practice using this tool among many other and performing visual assessments with thousands of athletes. Even though I have been using and studying the sensory & visual systems for a short while, before I come to any conclusions with anything, I try to consult with Dr. Harrison to make sure I am correct or not.

Insert Sensory / Visual training:
Understanding what you see is a missed opportunity by many athlete’s and coaches. What we have been able to do since Ryan had brought these problems to my tennis athlete was work on his binocularity using the EYE TRAC string in various conditions: low lighting, balancing, various movements and at various heights of the string.

We have also made it a point to work on his 3-D depth perception with the use of Dr. Harrison’s 3D Depth Perception and Visual Tracker, also in various conditions: low lighting, different heights, different distances away, while walking, while jumping. (Perhaps I will write about 3D Depth Perception in another article) All of these exercises were added into his normal physical preparation program between sets and exercises that usually took just around 50 minutes total for the workout.

Consistency and focus of attention are the most important aspects to using these tools for improvement. He was asked to use these visual tools several times a day in small chunks of time (10-20mins) when he could. He was also able to bring home an Eye Trac and some of the 3D cards that Dr. Harrison sells to have in his wallet and use when bored.

Quantifiable Results:
Results with visual and sensory training aren’t necessarily quantifiable such as an increase 40-yard speed, or vertical jump. It is more of a qualifiable result based on communication with the athlete and watching them perform. With the STGD Eye Trac along with all of the other of Dr. Harrison’s visual and sensory products, we have been using following his training recommendations and my baseball and tennis athletes all say that they can see the ball better and their issues (pulling the forehand / backhand, swinging early or late in baseball/softball) are feeling better. On average, my baseball and softball player’s batting averages have increase .200! In 5 straight tournaments my softball players have been hitting over an .800 batting average. My tennis athletes are able to be more patient and hit their spots. Even our basketball players say that they are able to stay with their opponents better as well as improve their foul shooting by 10%. These are good enough results for me to believe that this method of assessment and the training works and to recommend others invest some time in researching and evaluating ocular training to see if and where it could fit into the training of their athletes.