Today we are ecstatic to introduce our 8th and final presenter for The 2016 Seminar, Arizona Cardinals Strength and Conditioning Coach, Buddy Morris.

Buddy Morris just completed his second season as the Cardinals strength and conditioning coach after being hired on 3/4/14. Previously with the Cleveland Browns from 2002-04 where he worked with current Cardinals head coach Bruce Arians, Morris returned to the NFL in 2014 after working at the collegiate level for 19 years.

A native of South Park, PA, Morris has an extensive background in strength and conditioning dating back to his first job at his alma mater, the University of Pittsburgh, where he began his coaching career in 1980 in the first of his three stints with the Panthers. He worked under head coach Jackie Sherrill from 1980-89 and aided in the development of future NFL Hall of Famers Dan Marino, Rickey Jackson, Chris Doleman and Russ Grimm. During that period, Morris helped train 13 first round NFL draft picks and 15 first-team All-Americans.

After working as the wellness director for the Horizon Hospital System in Sharon, PA from 1989-97, Morris returned to Pittsburgh and worked from 1997-2001. During his second tenure at Pitt, the Panthers made three bowl appearances: the 1997 Liberty Bowl, the 2000 Insight.com Bowl and the 2001 Tangerine Bowl. Morris also developed the moniker for the Panthers strength and conditioning program, “The Pitt Iron Works.” In 2009, Muscle & Fitness Magazine name Morris’ gym one of the 10 toughest in America.

Morris then joined Butch Davis and the Cleveland Browns for three seasons before working at the University of Buffalo in 2006 as its Director of Sports Performance. After one season in Buffalo, he went back for his third stint at Pitt under head coach Dave Wannstedt where he worked from 2007-10. The Panthers made the 2008 Sun Bowl and the 2009 Meineke Car Care Bowl during that period.

Following his third stop at Pitt, Morris and his family opened a private gym in Buffalo called the New York Sports Center where he worked with athletes at all levels through personal training, group fitness classes and injury rehabilitation.

Morris worked with Roger Kingdom, the Cardinals assistant strength & conditioning coach and 1984 and 1988 Olympic gold medalist in 110-meter hurdles. He also helped develop NFL Hall of Fame running back Curtis Martin and Pro Bowl guard Ruben Brown while both were at Pitt.

He graduated from Pittsburgh in 1980 after lettering for four years (1977-80) in track and field. Morris is married to Monica and he has two daughters, Kara and Claire, and two stepsons, Fred and Troy.

JD: If you could, please give our readers a little background information about you, what your niche in the world of athletics is, accomplishments, how you got there, education, any products you have available and/or notable publications. 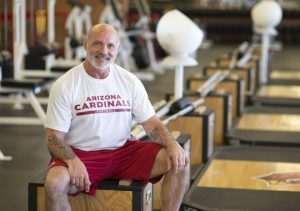 BM: Don’t do shit just to do it:
• Foot/Speed Ladders
• Training in sand
• Functional movement screens
• Following a belief that Olympic lifting is the only way to develop power/high force outputs.
• Strength is the only important biomotor ability (chasing numbers instead of proper technical skill and movement patterns) – they don’t attempt to groove proper movement patterns.
• Sympathetic dominant “max out” days – constant sympathetic over-reaching.
• Theme days in the weightroom.
• Gimmicks.

BM: I plan on creating and explaining a global glimpse of our “system” that expands yearly here.

BM: All young physical preparation coaches need to learn how to “coach” on the floor before concerning themselves with the task of writing training programs. We all need to understand that we are “stress managers” and each athlete has their own unique adaptive response to training stimuli. There exists 7 (8) systems that adapt to stress in the human body and no one system works independent of the others. Those systems (cardiac, cardiopulmonary, detoxification, hormonal, metabolic, neuromuscular, CNS and immune) do not all recover at the same time. Do not over train/overstress the slowest system to adapt. Even adaptation is a skill.