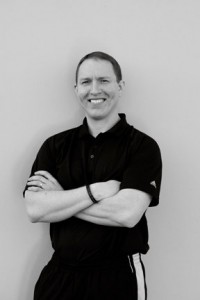 Mike Robertson is the President of Robertson Training Systems and the co-owner of Indianapolis Fitness and Sports Training (I-FAST) in Indianapolis, Indiana. Mike has made a name for himself as one of the premier performance coaches in the world, helping clients and athletes from all walks of life achieve their physique and sports performance goals.

But enough with the stuffy intros – here’s a little bit about me.

As of 2010, I’ve officially been in the fitness industry for 10 years. In that time, I’ve done and seen a little bit of everything. From 2000-2002 I was an assistant/volunteer strength and conditioning coach at Ball State University. While there, I was primarily responsible for working with men’s and women’s volleyball, women’s soccer, football, and our powerlifting team, although I worked with individual athletes from all 26 sports.

At that same time, I was working towards completing my Masters Degree in Sports Biomechanics. I was lucky enough to study under two wonderfully smart gentleman, Dr. Robert Newton and Dr. William Kraemer. These two guys really laid the foundation for my learning going forward. I graduated with my Masters of Science in May of 2002, and the real world beckoned.

I spent the next three years in Ft. Wayne, Indiana, where I headed up the Athletic Performance Center. Don’t let the name fool you, however – I primarily worked with chiropractic rehabilitation clients. This is where I was really introduced to the assessment process, physical therapy, rehabilitation, and corrective exercise as a whole. This definitely was not my comfort zone at the time, but I learned a ton during my time there and this helped really broaden my scope as a trainer and coach.

In 2005 I moved back from Ft. Wayne to Indianapolis. There, I teamed up with Mike Dodd to form Custom Fitness, a high-end, in-home personal training company. Like every step in my journey, this was out of my comfort zone and got me working with a new population. With Custom Fitness I got a firm appreciation for what it was like to work in a truly one-on-one setting, often with adults in their 40′s and 50′s.

As Robertson Training Systems grew, I knew there would be a time when I’d need to make it my priority. I did that in 2008, when I left Custom Fitness and took 6 months off from training and coaching all together. Strangely enough, it only took me 2 months to get seriously bored and the itch to train and coach clients again was back (and worse than ever!). It was at this point in time that Bill Hartman and myself decided it was time to team up and open our facility, Indianapolis Fitness and Sports Training (IFAST).

Since 2008, it’s really been a whirlwind. In 2009, IFAST was named one of America’s Top 10 Gyms by Men’s Health magazine. We’re now at the two year mark and still going strong. It seems as though IFAST is growing each and every month.

As time progressed I found I like to write. I still can’t imagine that myself, as I absolutely loathed writing all throughout middle and high school.

In the past 8 years, however, I’ve written well over 100 published articles for a wide variety of sites and magazines. Some of the more notable publications include T-Nation.com, Men’s Health, Men’s Fitness and Outside magazines. At this point in time I’m very focused on growing the RTS site and contributing here, so that’s where you’ll find the bulk of my current literary gems.

If you’ve read all this, you’re definitely a trooper. I’d just like to thank you for taking the time, and I hope that over the coming months and years you find some information that takes your athletes training and performance to the next level.