Jay DeMayo has been the Head Strength and Conditioning Coach for Men’s and Women’s Basketball at the University of Richmond since October 2005. Jay is a graduate of the State University of New York College at Cortland where he was a two year starter on the Men’s Soccer team. Prior to taking over the responsibilities of Men’s and Women’s Basketball at UR Jay worked with every team on campus as the Assistant Strength and Conditioning Coach working. During his tenure at Richmond, Coach DeMayo has worked with five All-Americans, and 10 Atlantic 10 championship teams. Presently Jay is also responsible for the dry land training for NOVA Aquatics LLC, one of the top youth swim clubs on the eastern seaboard where he has coached over twenty athlete’s whom have qualified for Olympic Trials.

Coach DeMayo’s constant effort to better himself as a coach has brought him numerous certifications. Coach DeMayo has his Level I coaching certification from USA Track and Field, is certified as an American Kettlebell Club Coach, United States Weightlifting Sport Performance Coach and a Certified Strength and Conditioning Specialist by the National Strength and Conditioning Association. 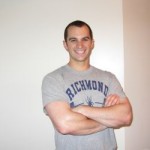 Danny Raimondi is an aspiring strength and conditioning coach currently pursuing his Masters of Education in Applied Kinesiology at the University of Minnesota. At Minnesota, Danny has been working as a research assistant under head Olympic strength and conditioning coach Cal Dietz. He is also currently overseeing the strength and conditioning for Columbia Heights High School in Minnesota. Prior to graduate school, Danny obtained his B.A in English Literature from the University of Richmond. While at U of R, Danny volunteered his time in the weight room, where he first found his love for training athletes. In addition to athletic performance, Danny has also recently been involved in the field of editing, combining his passion for English with his love of sports science.

He can be reached at danny.raimondi@gmail.com.